Luann Algoso is a Portland, Oregon-based writer, creative activator, cultural worker, and strategic communications specialist. Her work in organizing both in Asian American and women-identified spaces melds at the intersection where the arts meets activism. As a cultural worker, Luann is in service to using her art in building movement for justice and liberation. She utilizes creative strategies and tactics to center the voices of communities that are directly impacted by injustice and oppression and supports the leadership development of those impacted to create those messages. Luann is originally from Anaheim, California and moved to Portland in 2010. In 2015, she received her Master of Arts degree in Conflict Resolution at Portland State University with the thesis titled, “Comedy as a Platform for Marginalized Voices: Asian American Women and the Disoriented Comedy Showcase”. She is a 2017 recipient of the Golden Spot Award Residency, a curated artist in residency program with Caldera Arts. Follow her on Twitter and Instagram at @luann_algoso and learn more about her work at luannalgoso.com.

Director/Writer, Christian Henry
Christian is a filmmaker and a television writer/producer for a network affiliate of NBC. Her recent work includes producing the award-winning short film We Have Our Ways. The film was named the Best Oregon Short Film at the 2018 Portland International Film Festival. Christian’s film, From Salem to the Salon, screened in the 2016 Portland Oregon Women’s Film Festival and the Oregon Lens Film Festival by OPB. Christian also serves on the board for the Portland chapter of Women In Film. She was named one of Portland’s Top 10 Social Changemakers by Mac’s List. 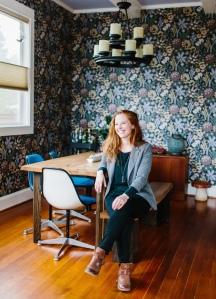 Producer, Eva Moss
Eva Moss’s love of creating story through film goes back to childhood and VCR to VCR editing (mash-up of Orlando and Grand Canyon anyone?). She worked for a decade on PBS documentaries, co-producing Out Run, Ask Not, Mr. Cao Goes to Washington, States of Grace, and Emmy-nominated A Village Called Versailles, and helped edit, produce, and distribute dozens more. Between the Lens, her production company specializes in micro-documentaries for small businesses and non-profits. She has directed two narrative shorts, a commercial, and produced a short film and two web series. Eva is a co-founder of Couch Film Collective, a non-profit dedicated to supporting women and POC in film. She believes this industry is uniquely positioned to change global dialogue and culture by empowering new voices.